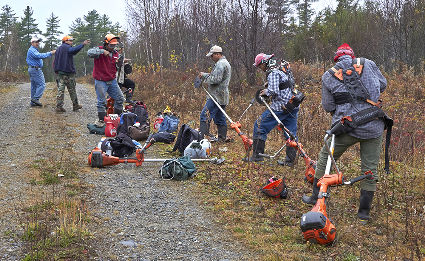 The hand crew is preparing their brush saws to remove all undesirable tree species and other growth that competes with the trees wanted such as spruce and fir.  By applying the pre-commercial thinning practice, the time needed to grow the commercial timber to a mature age for harvest can be cut in half.  This way, a selective harvest can probably be conducted in the next 10-15 years in some of these areas.  In 2014, this practice was applied to nearly 180 acres of forest, making these areas some of the most productive forests in the state of Maine.